The Hippo, is one of Africa's iconic animals, much like the Elephants and the Lions, yet we don't see them much because 95 percent of their bodies are usually hidden beneath the water.

Hippo have a reputation as one of the most dangerous killers in Africa but this is more due to their territorial temperament than their nature. However, as with humans, the older hippos get, the more grumpy they are and it is these older bulls that have been kicked out of their family group, often with mortal wounds, that cause the many deaths in Africa each year.

Despite their size, their power and ferocious nature Hippos scuttle to the safety of the water at the slightest sign of danger. Surprisingly Hippo are not good swimmers. They cross deep water by walking or running along the bottom. They outweigh a lion 10 times yet the sight or smell of one sends them into a frantic headlong charge towards the water knocking down all in front of them. It is during these frantic charges that you do not want to be between them and their deep water safe haven!

Hippo's are social animals and live in family groups, called pods. With a couple of older cows seeing over the younger ones and the babies while the dominant bull will keep all territorial challenges at bay. It can be extremely difficult to distinguish between the sexes of this game species. Watching these powerful masses of muscle chomp at each other with razor sharp sabre-like teeth is a sight to behold. Often bulls will fight to the death yet most of the time the weaker will yield and run for it. Compared to the majority of Africa’s game animal species, Hippo live for a relatively long time. 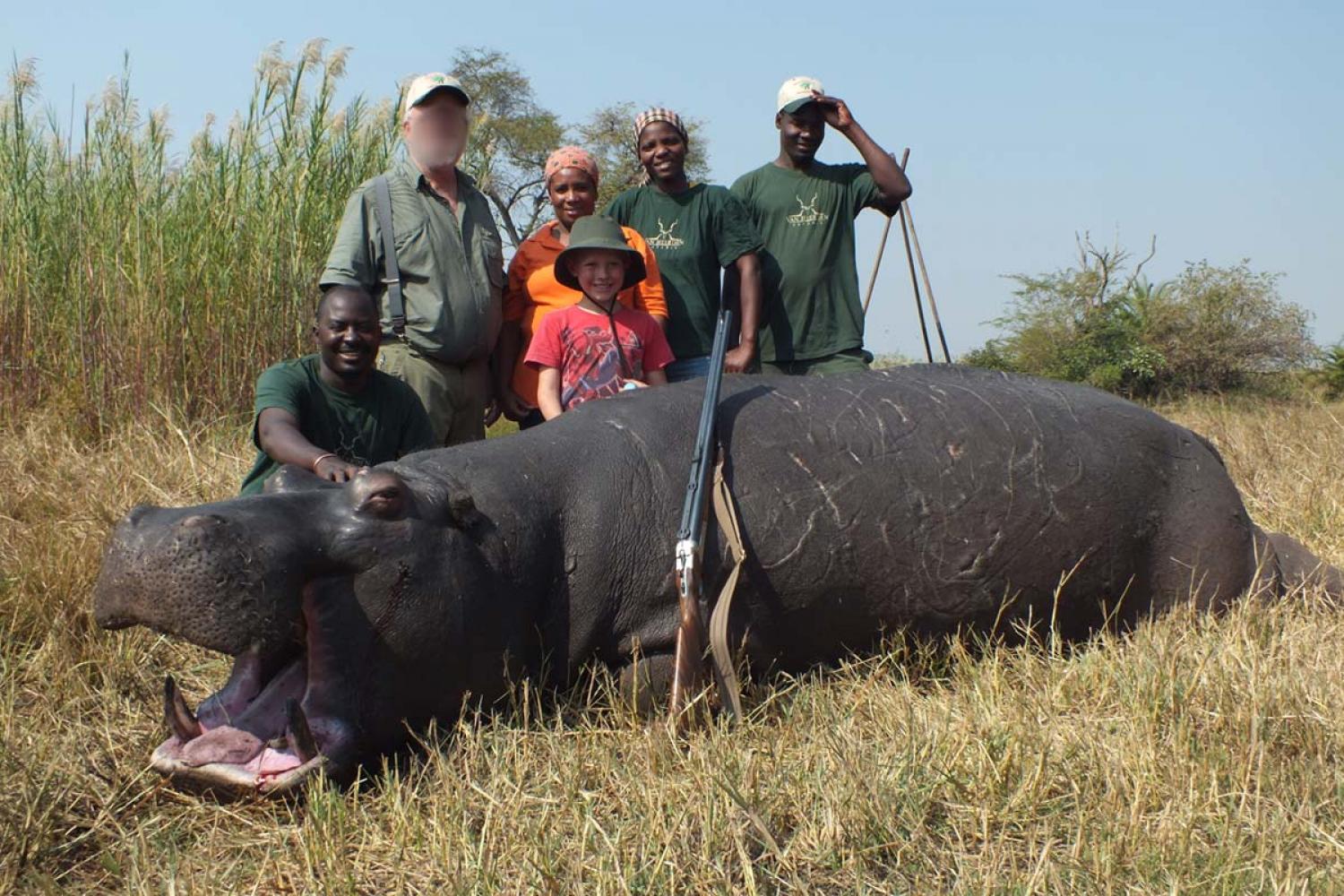 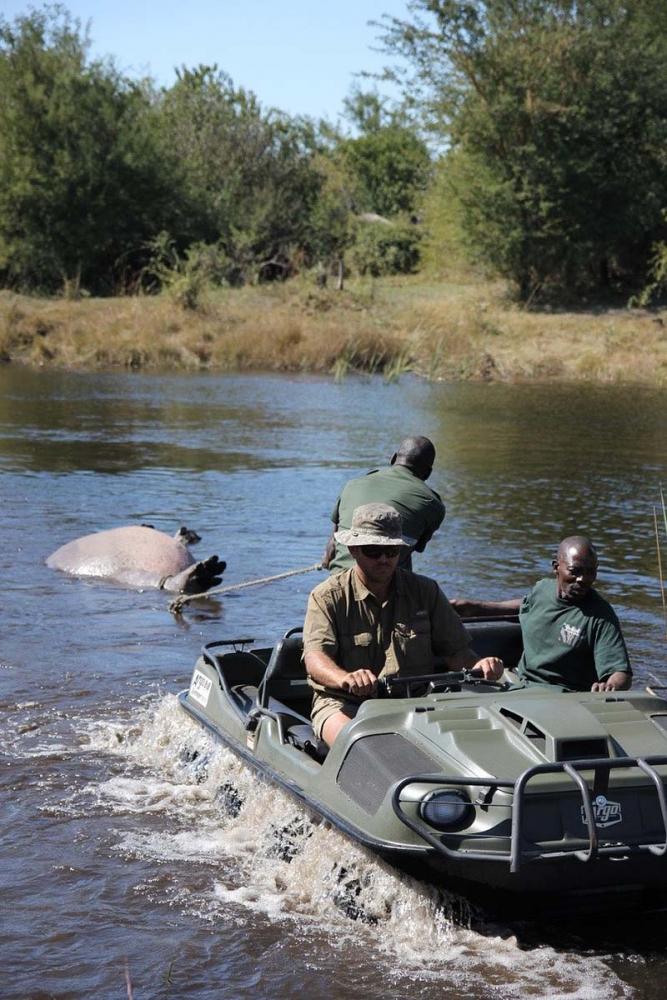 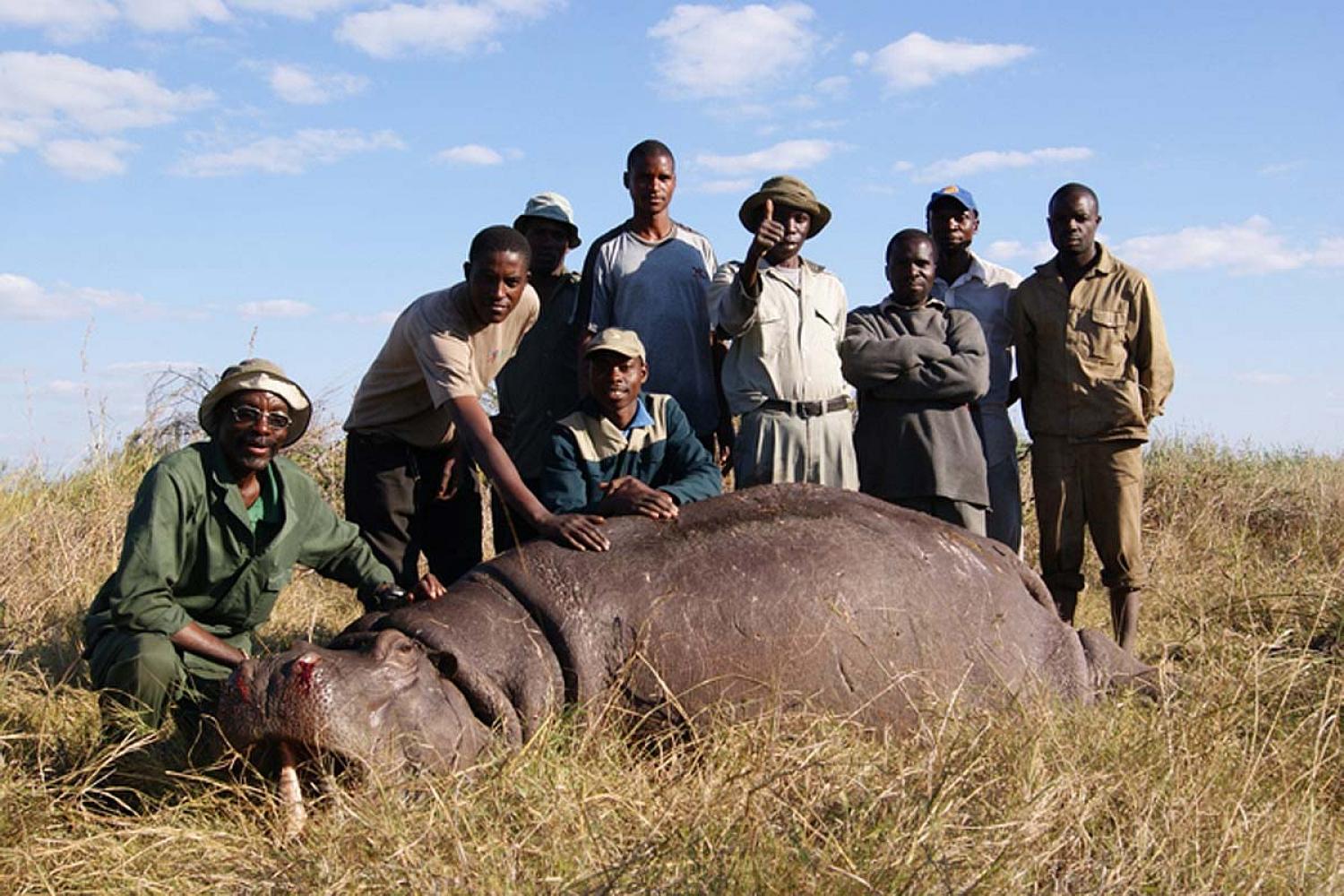 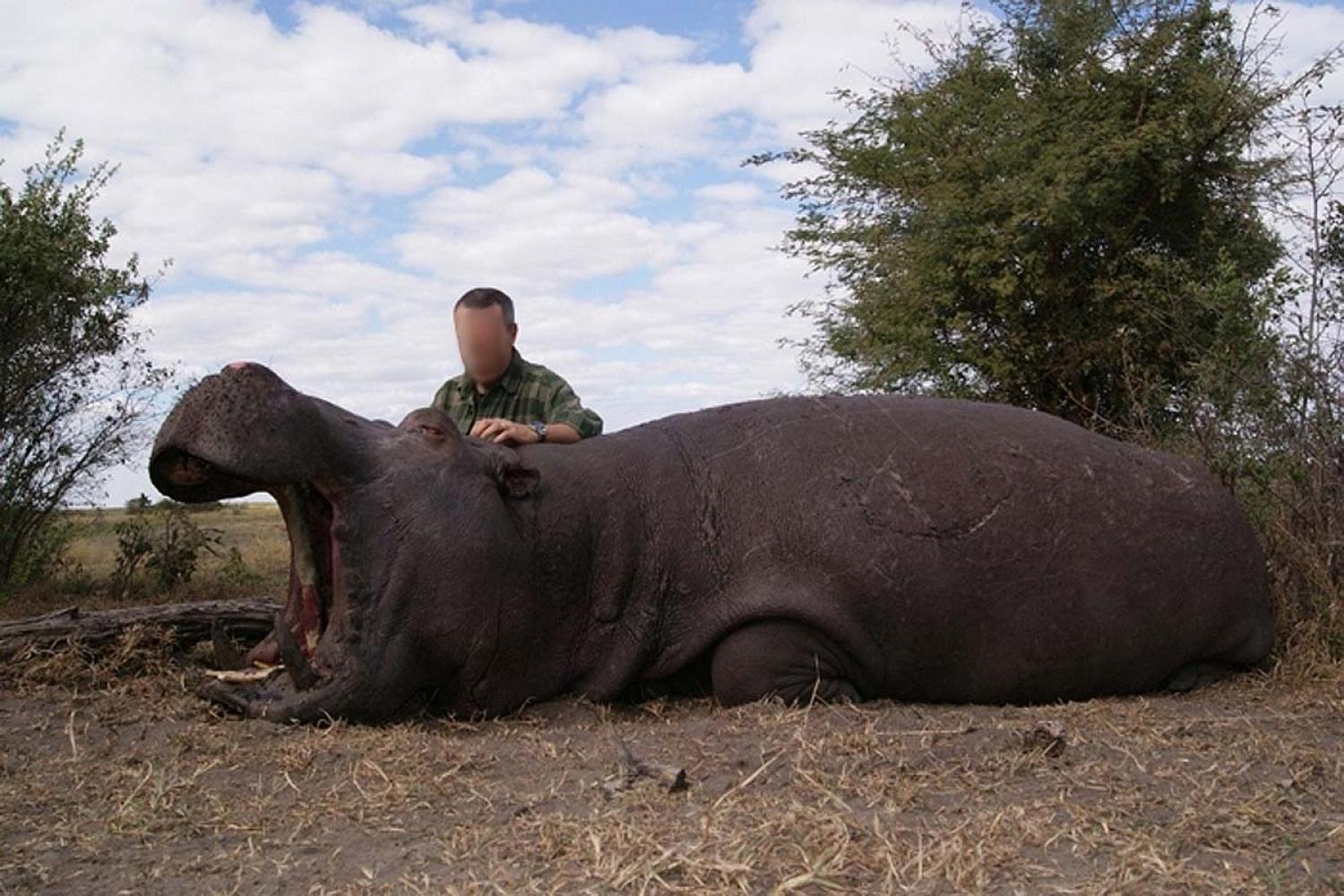 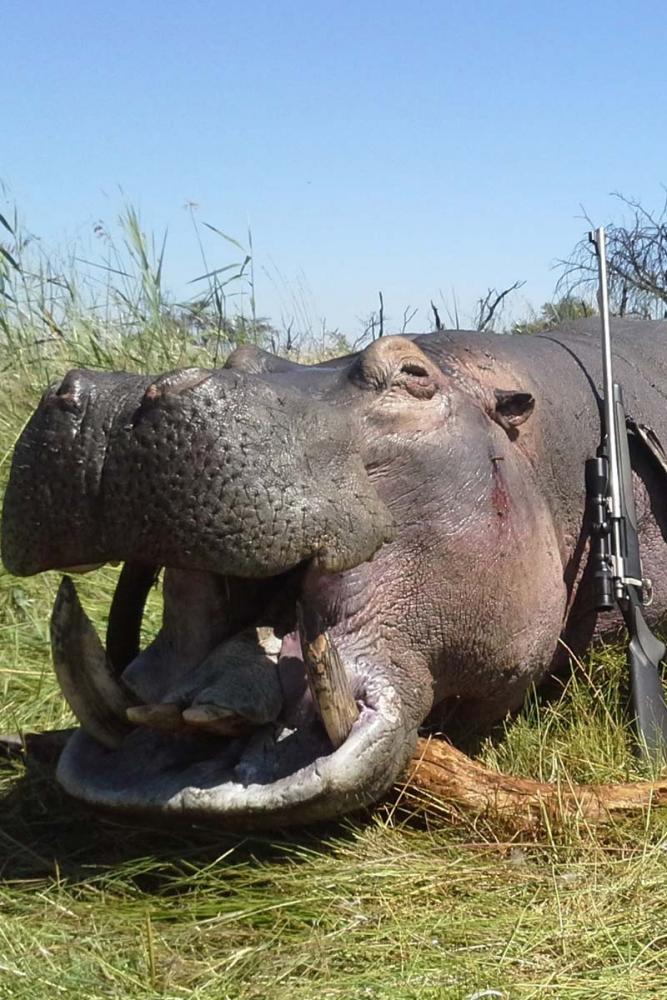 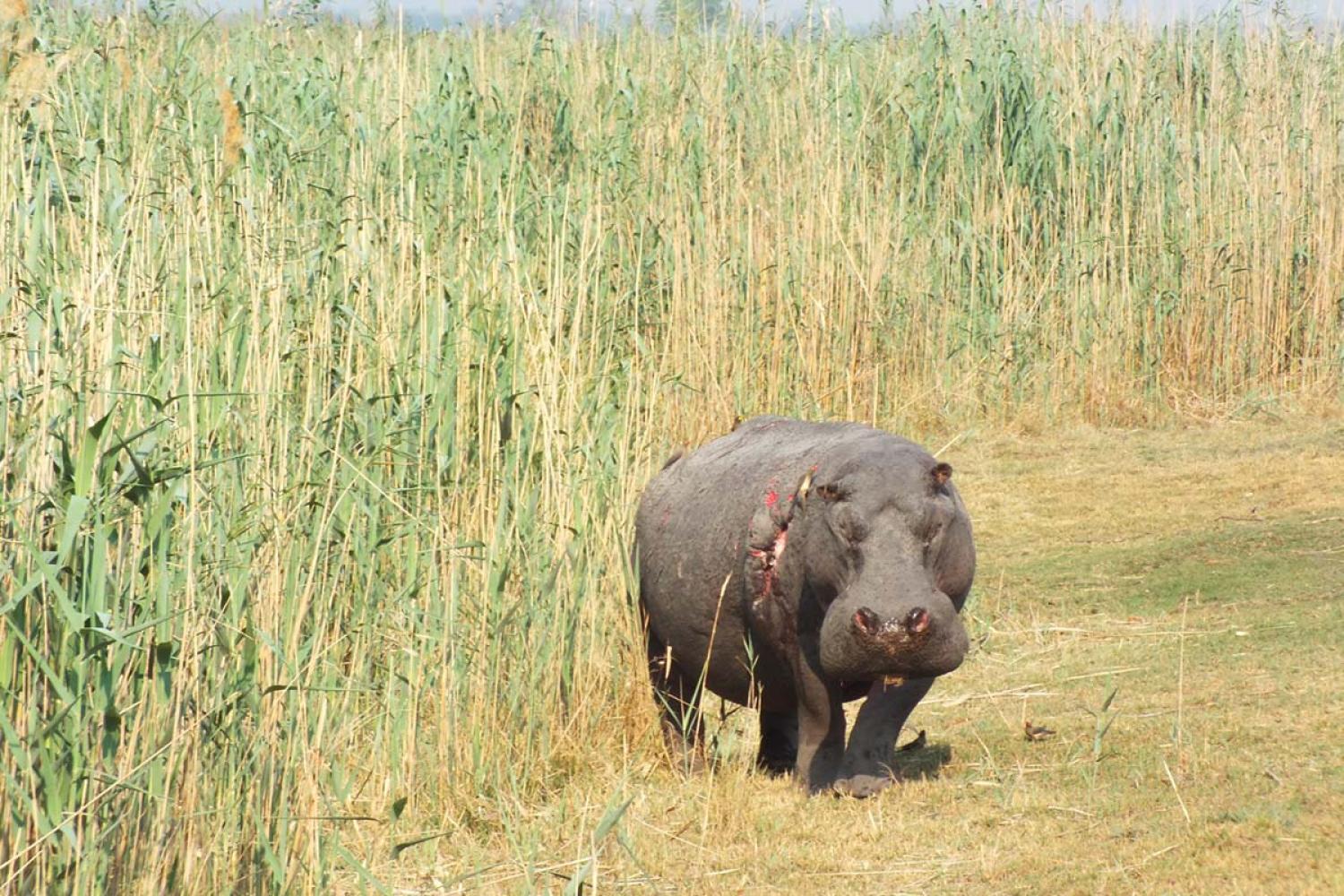 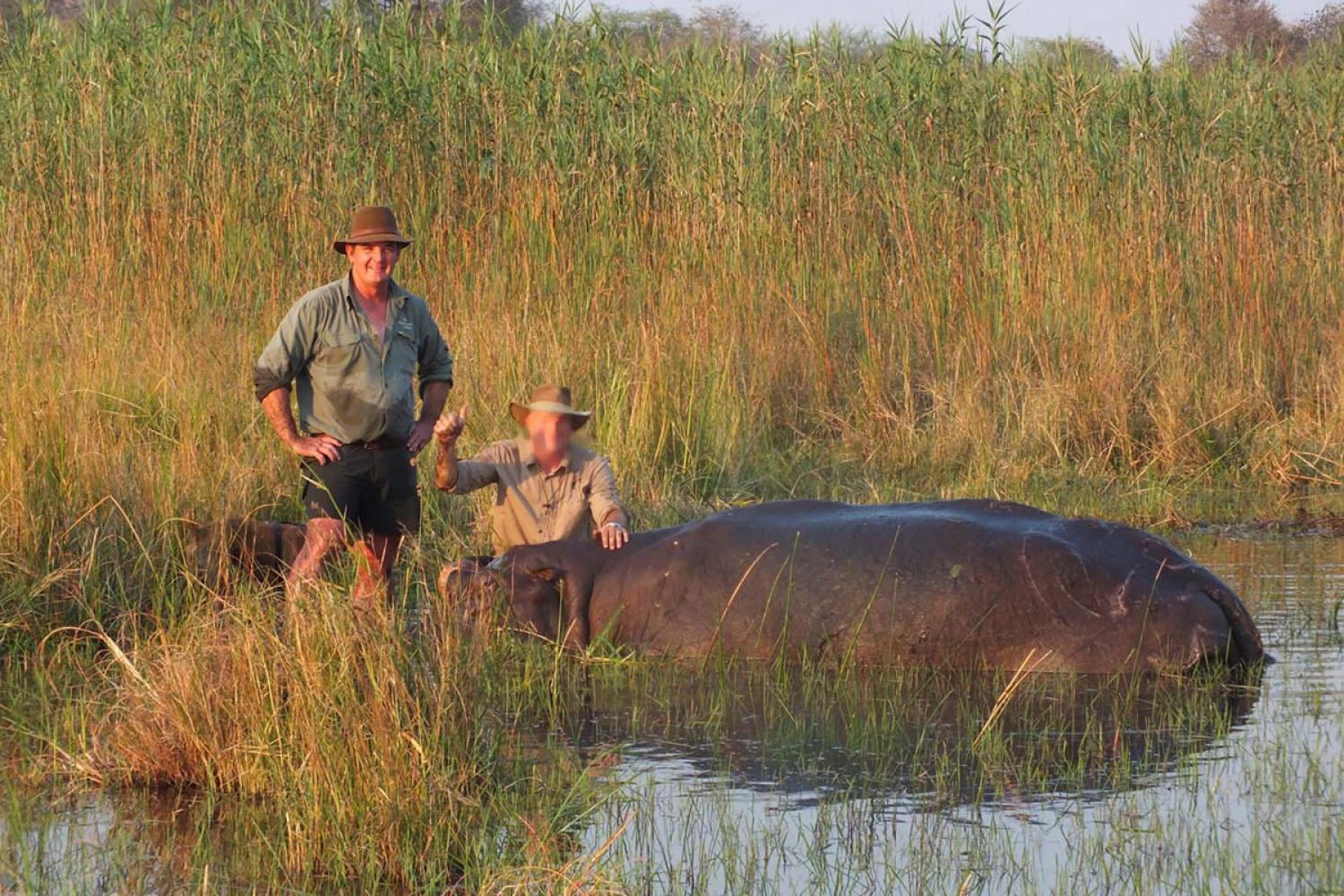 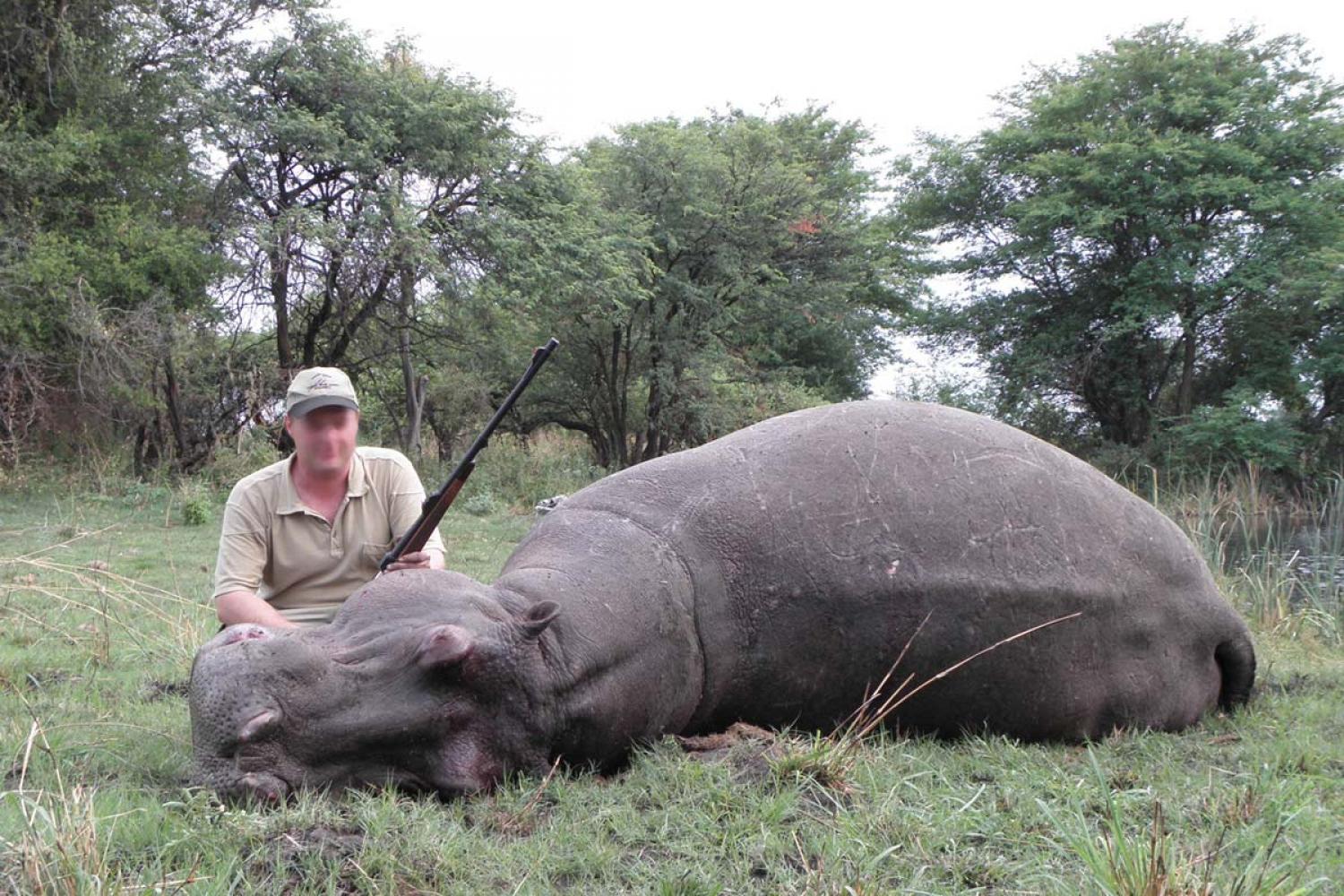 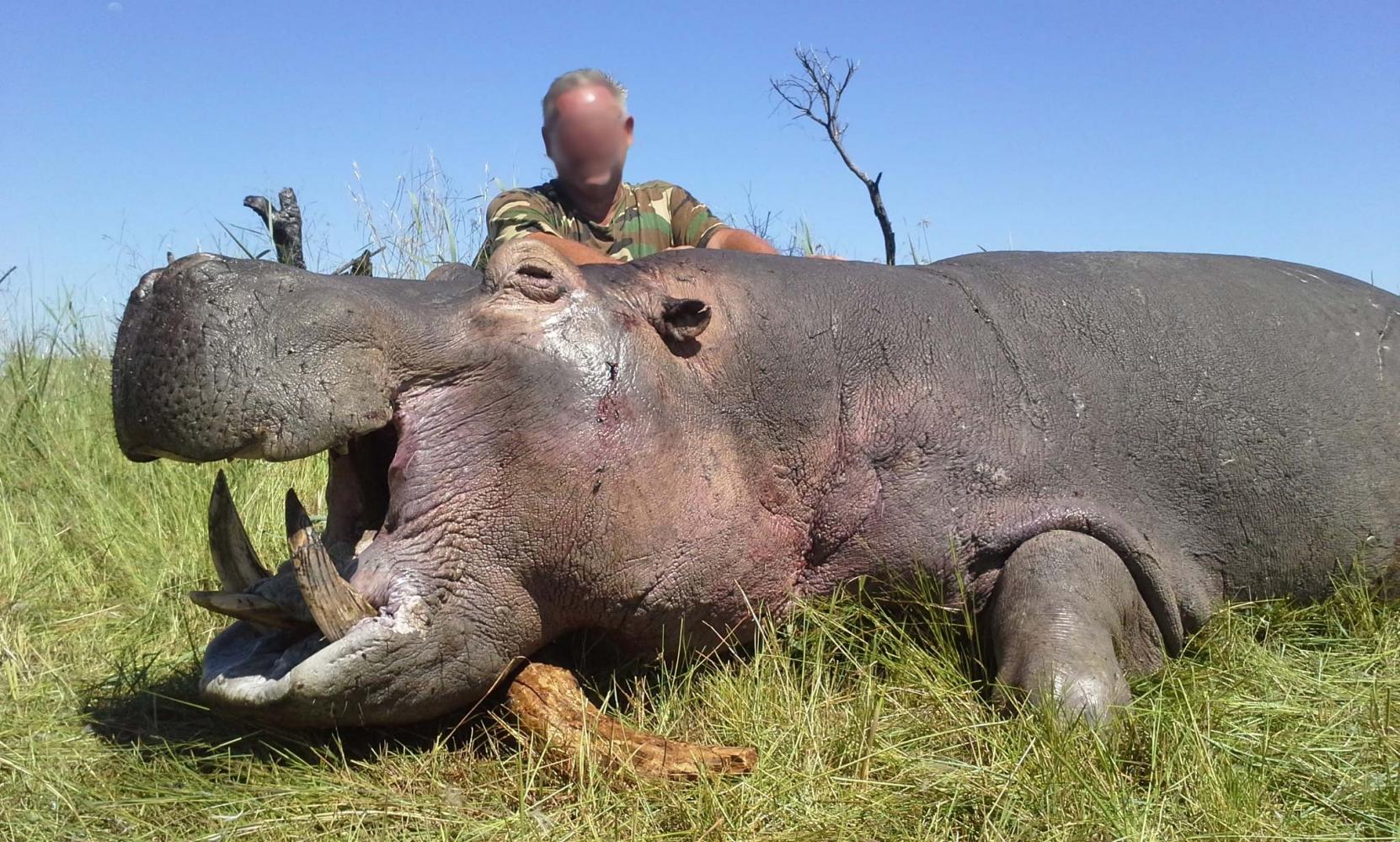 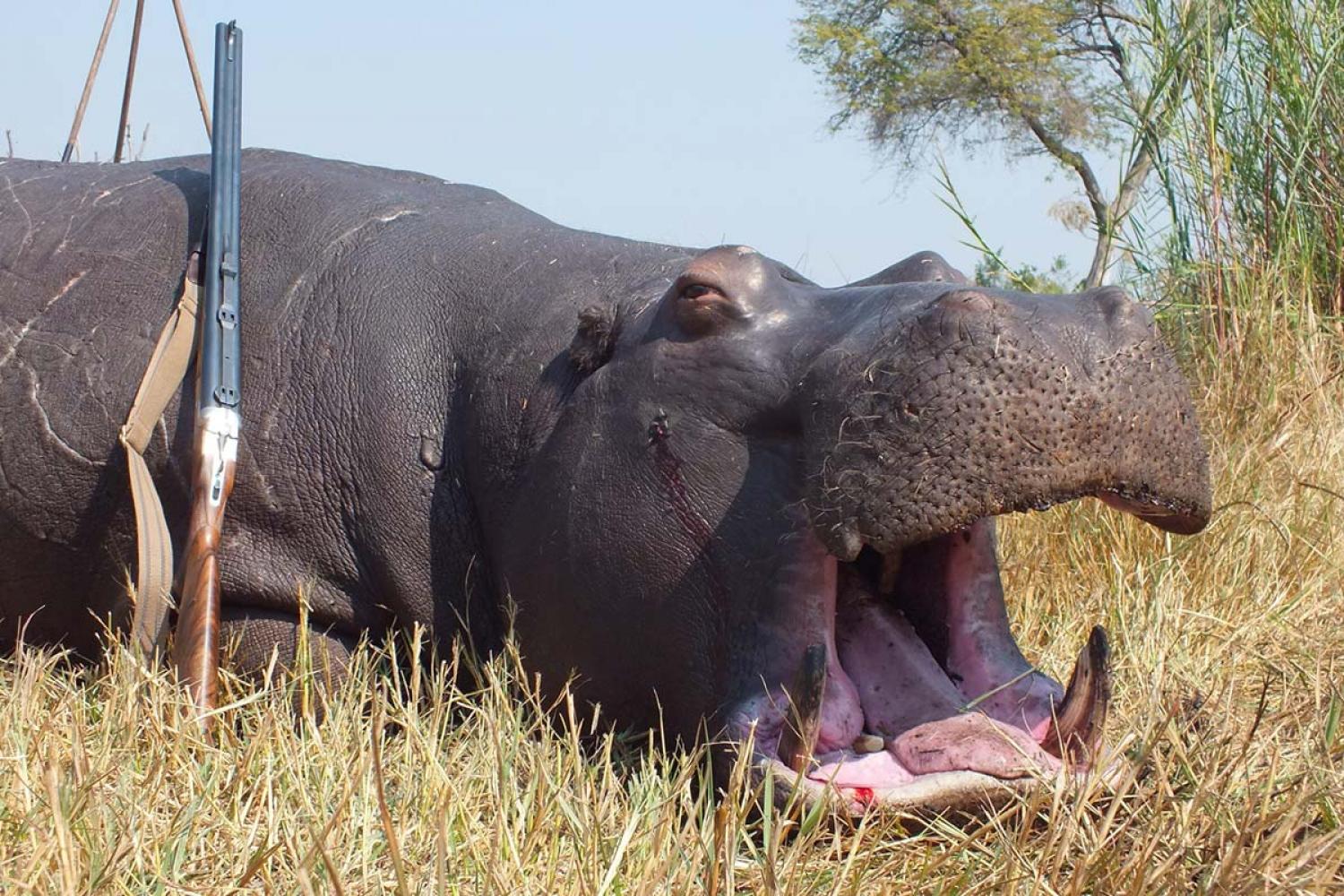 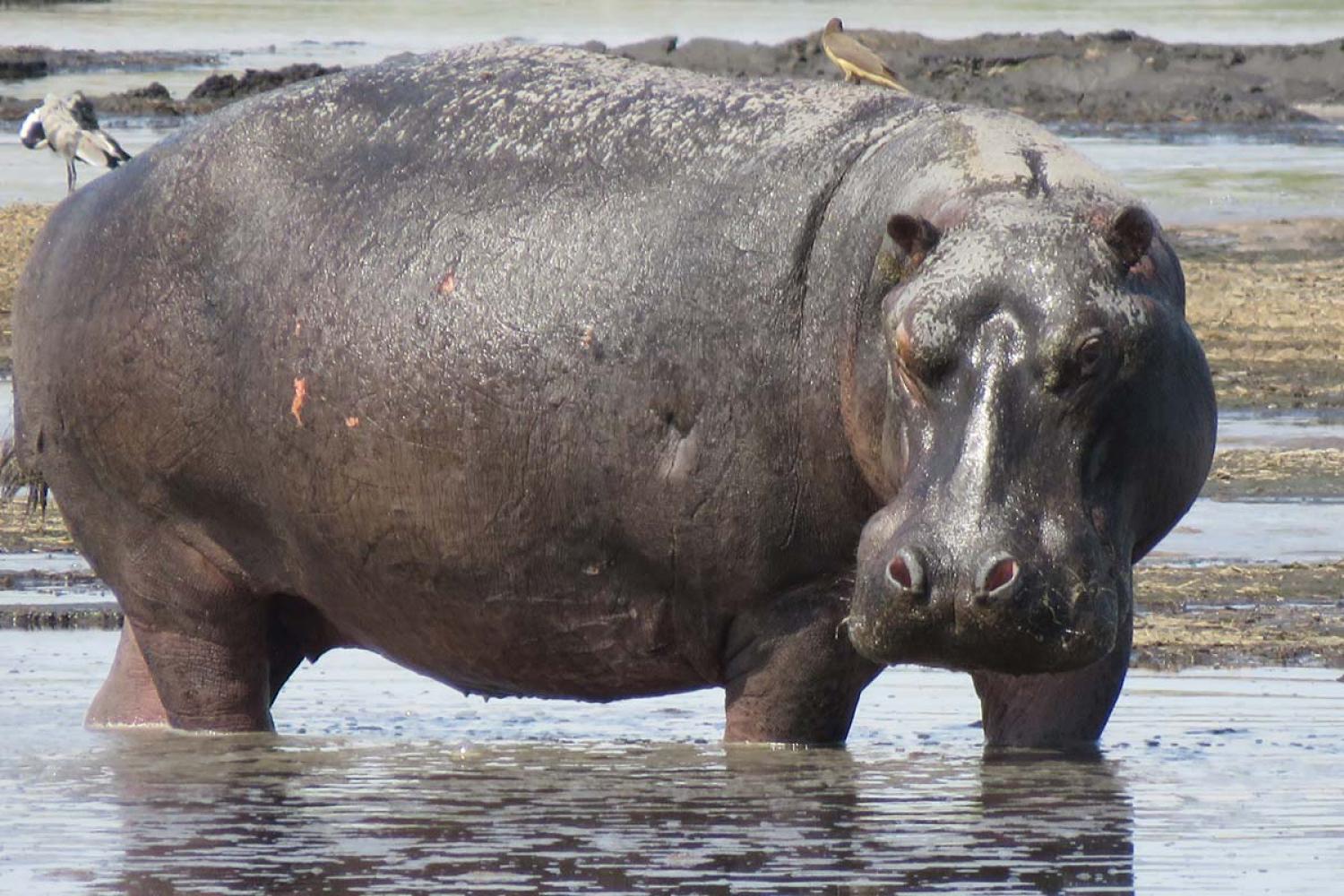 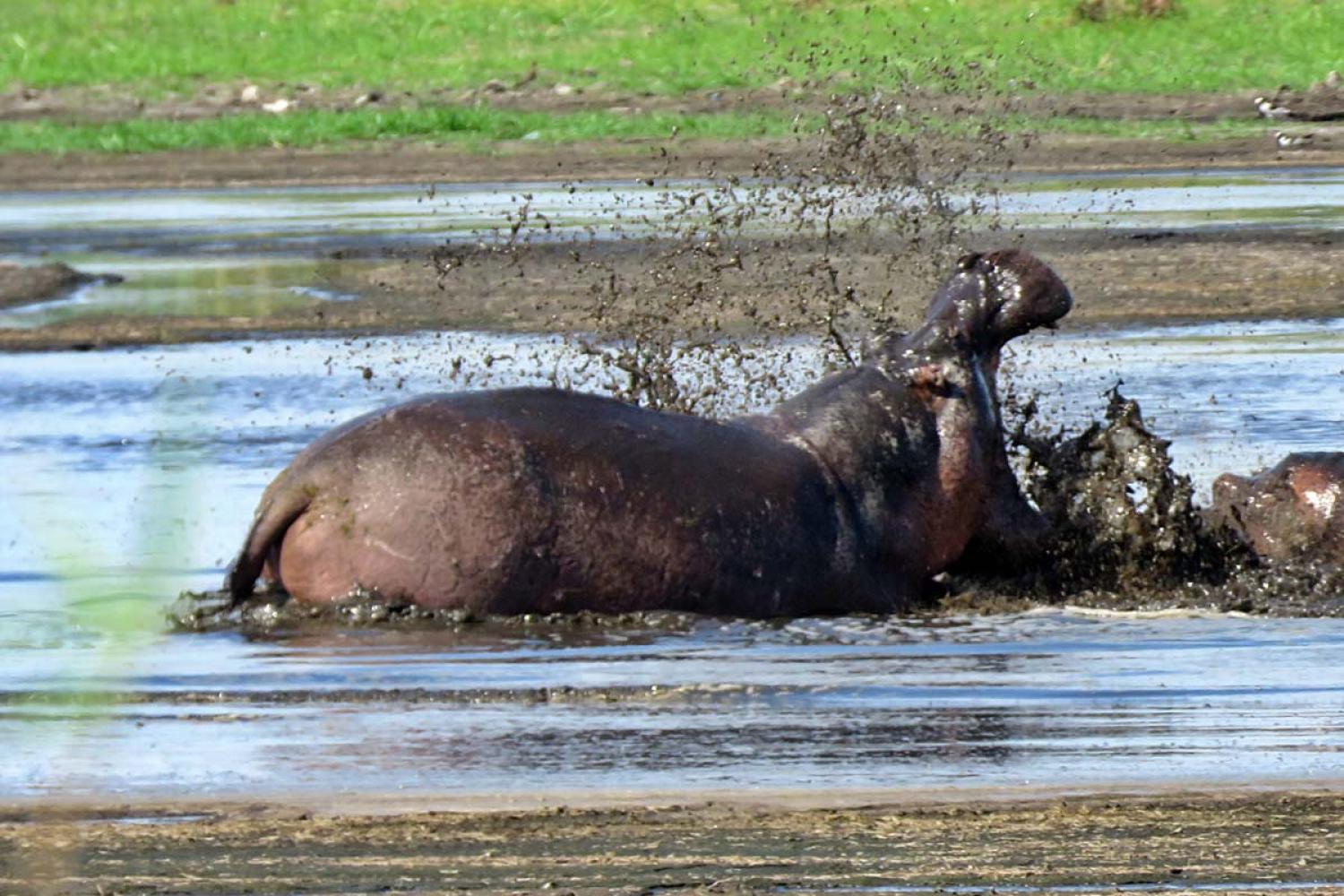 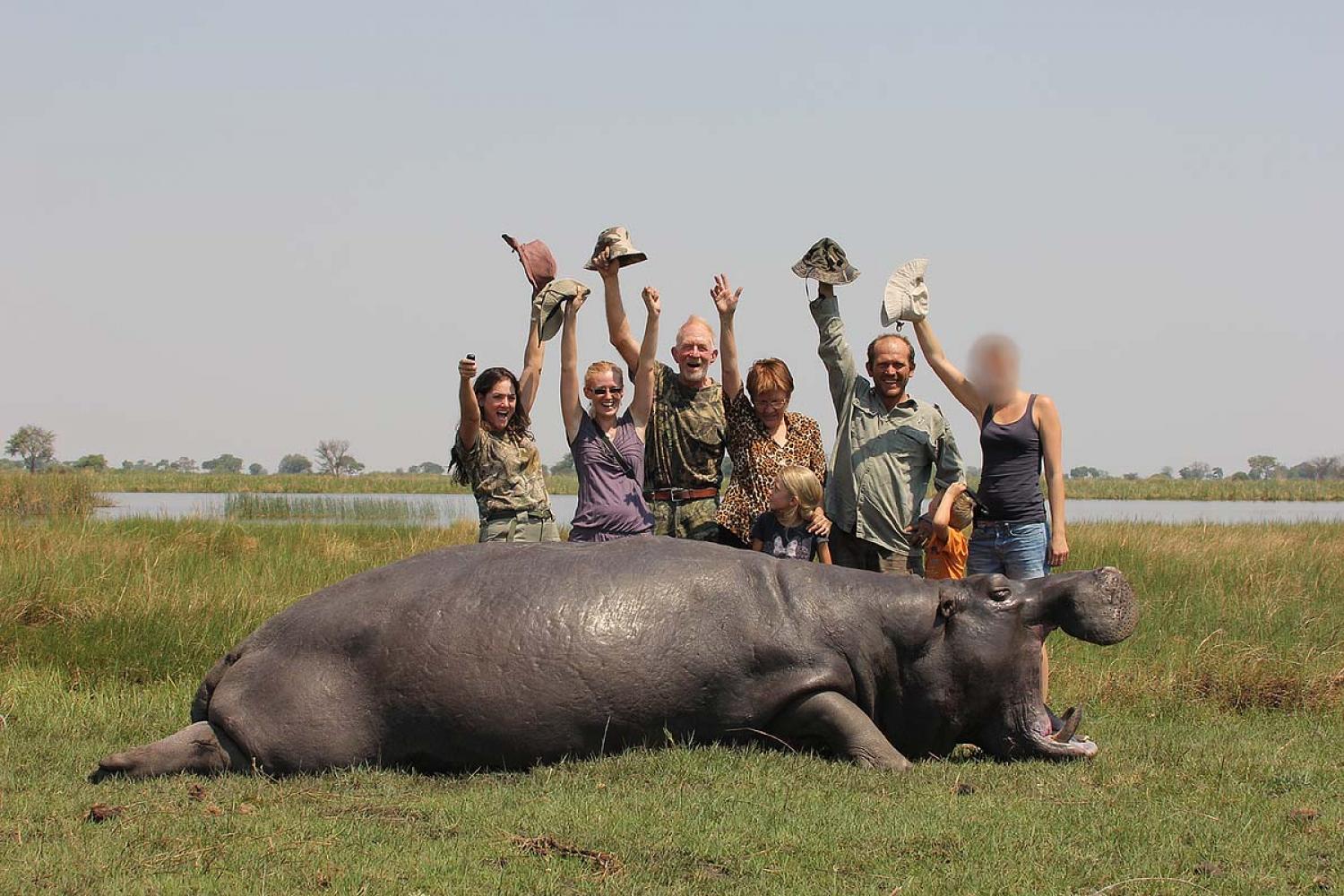 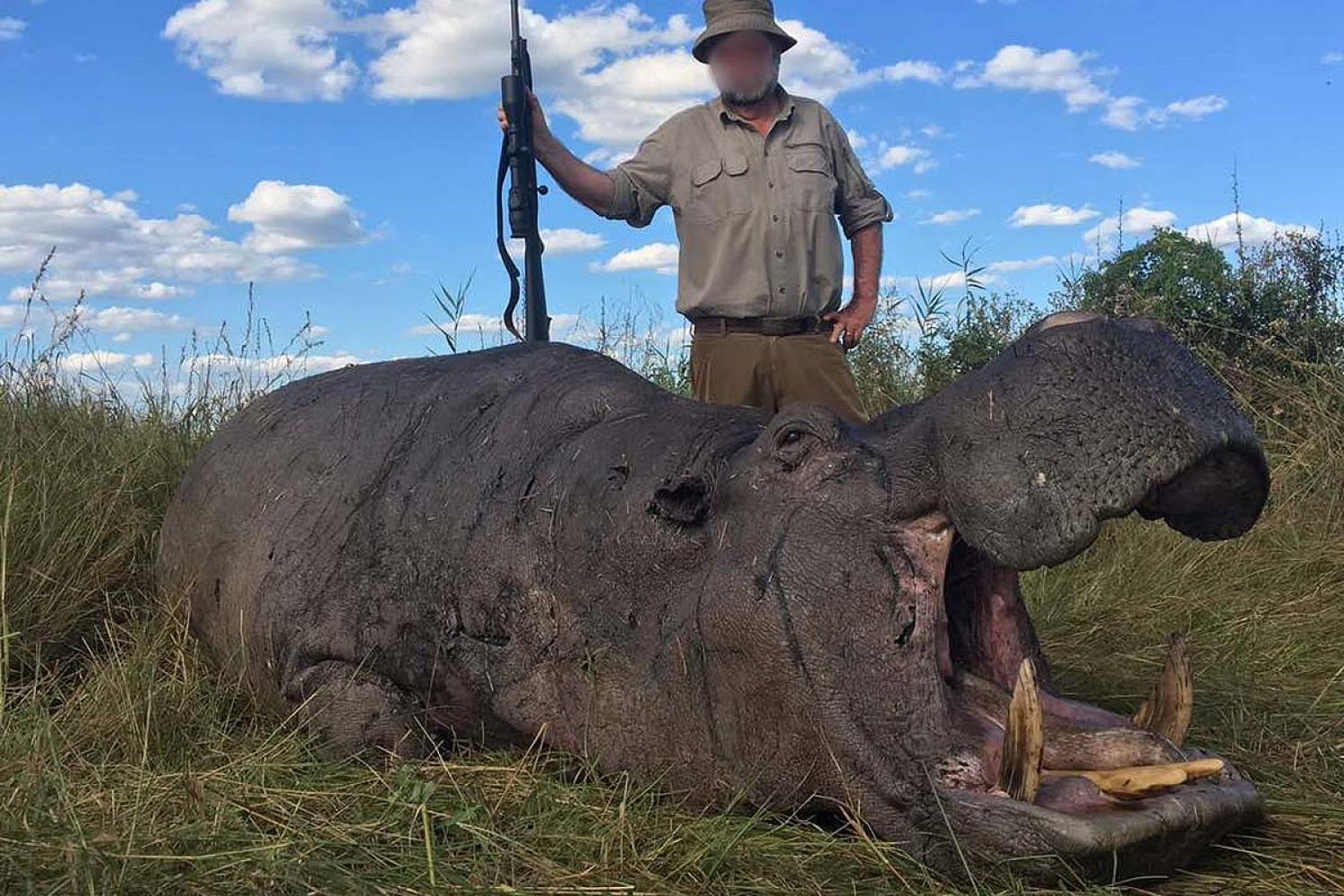 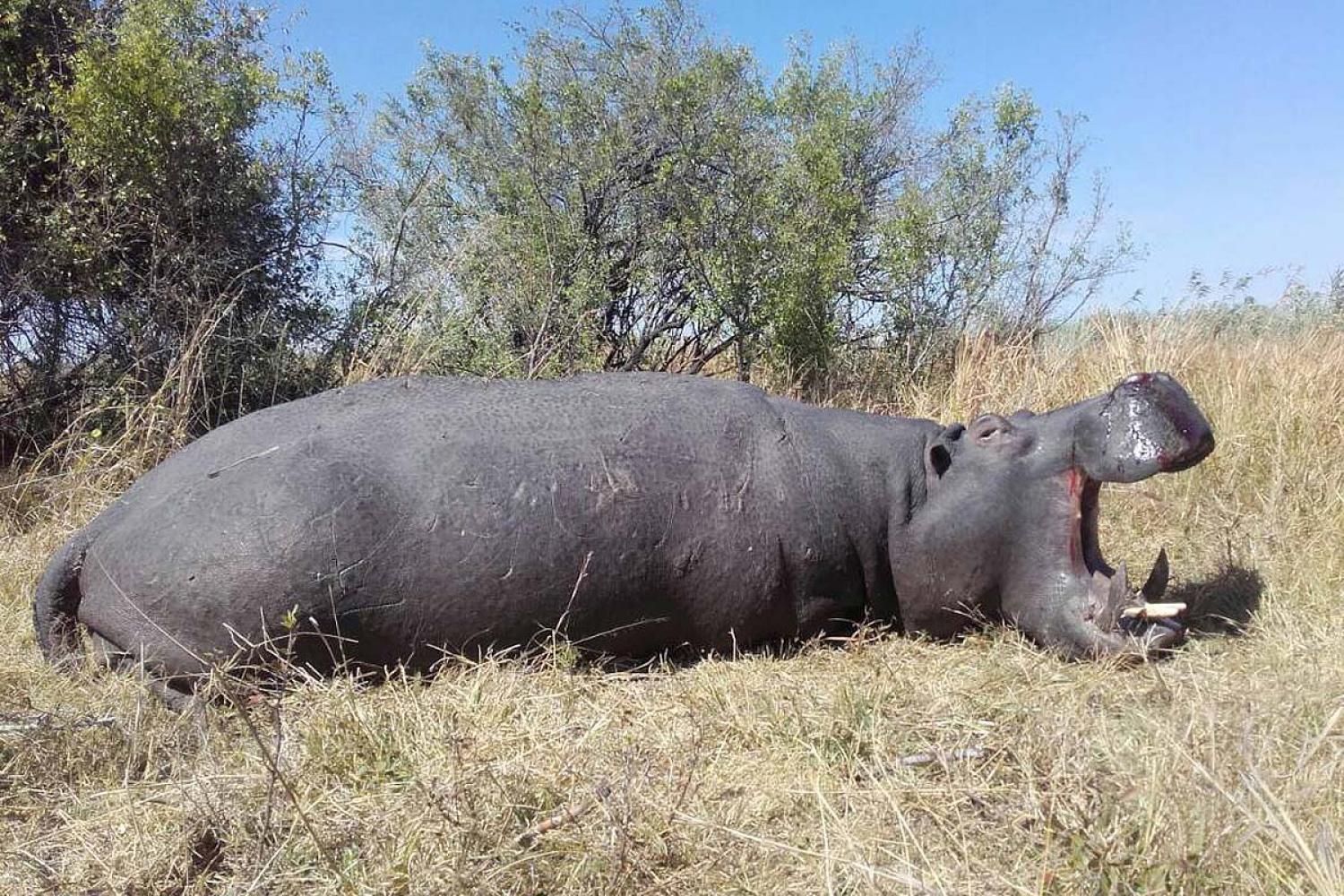 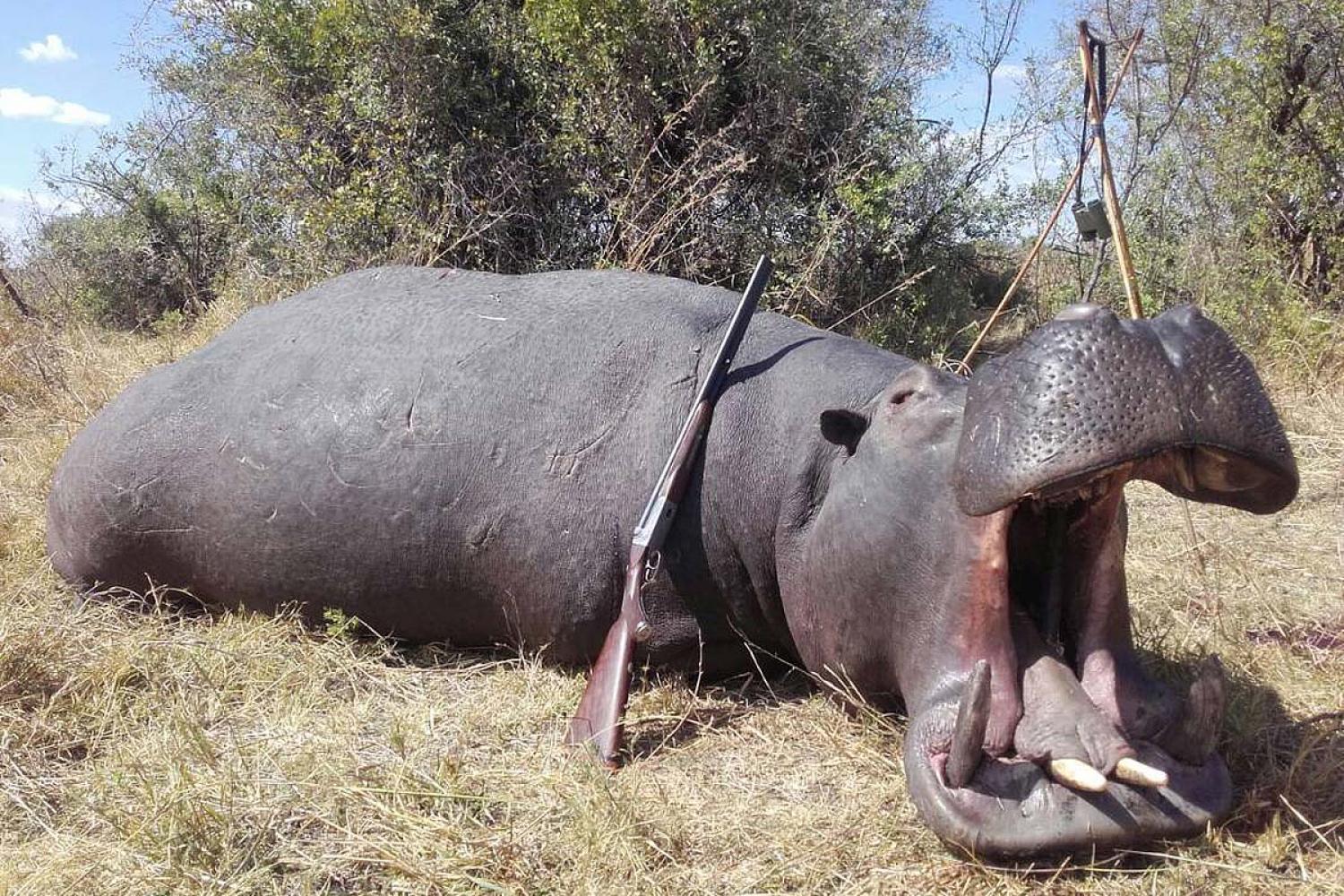 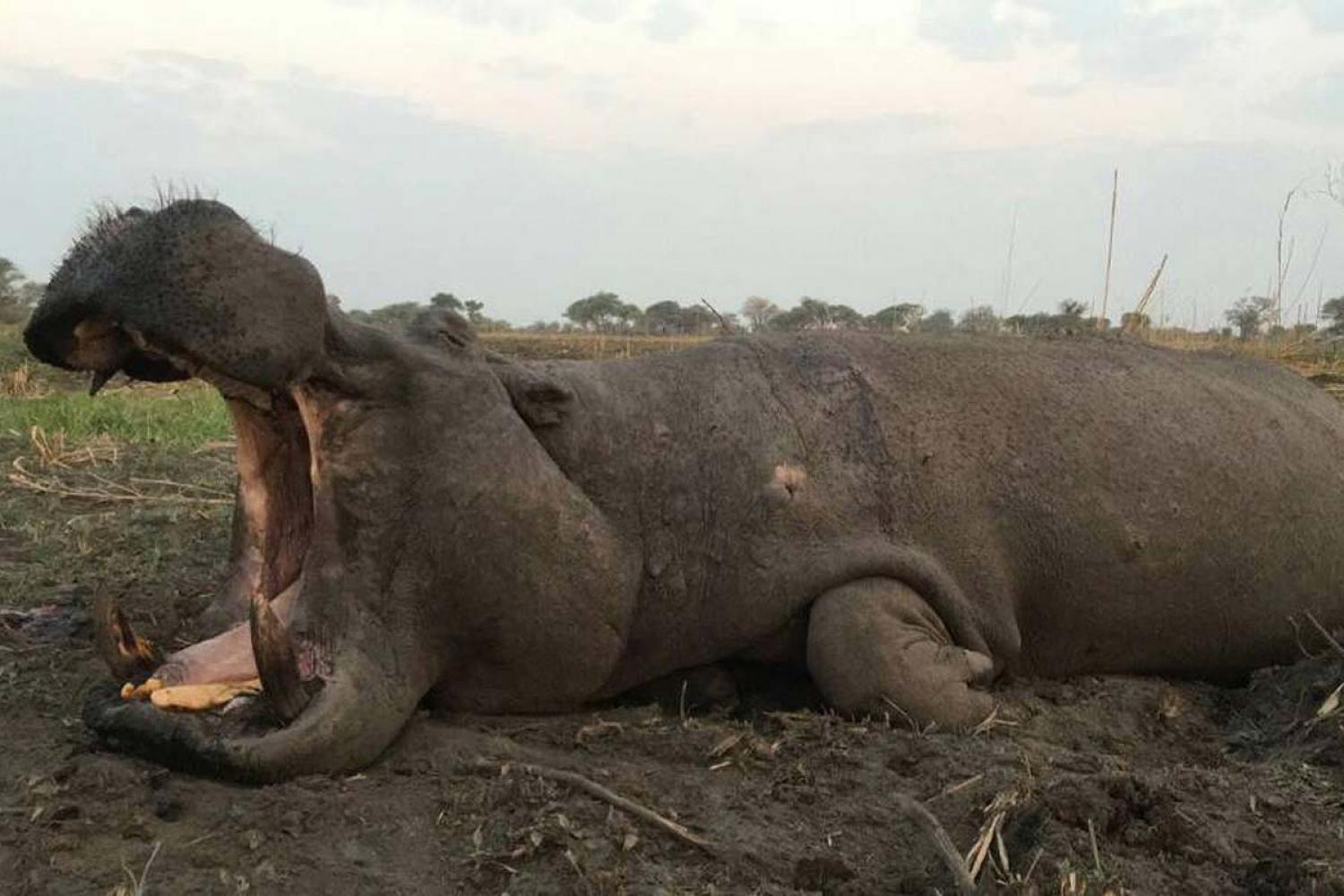 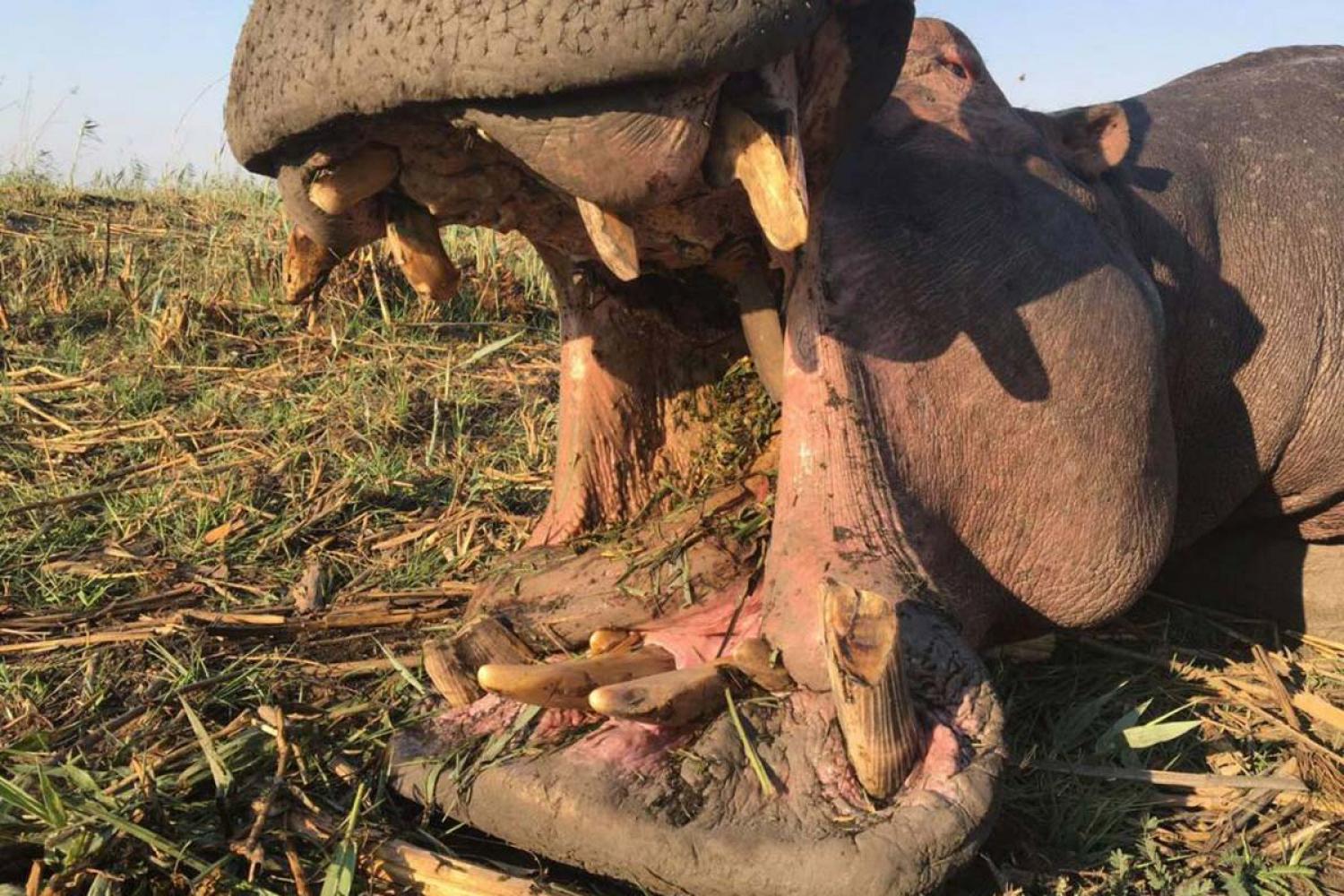 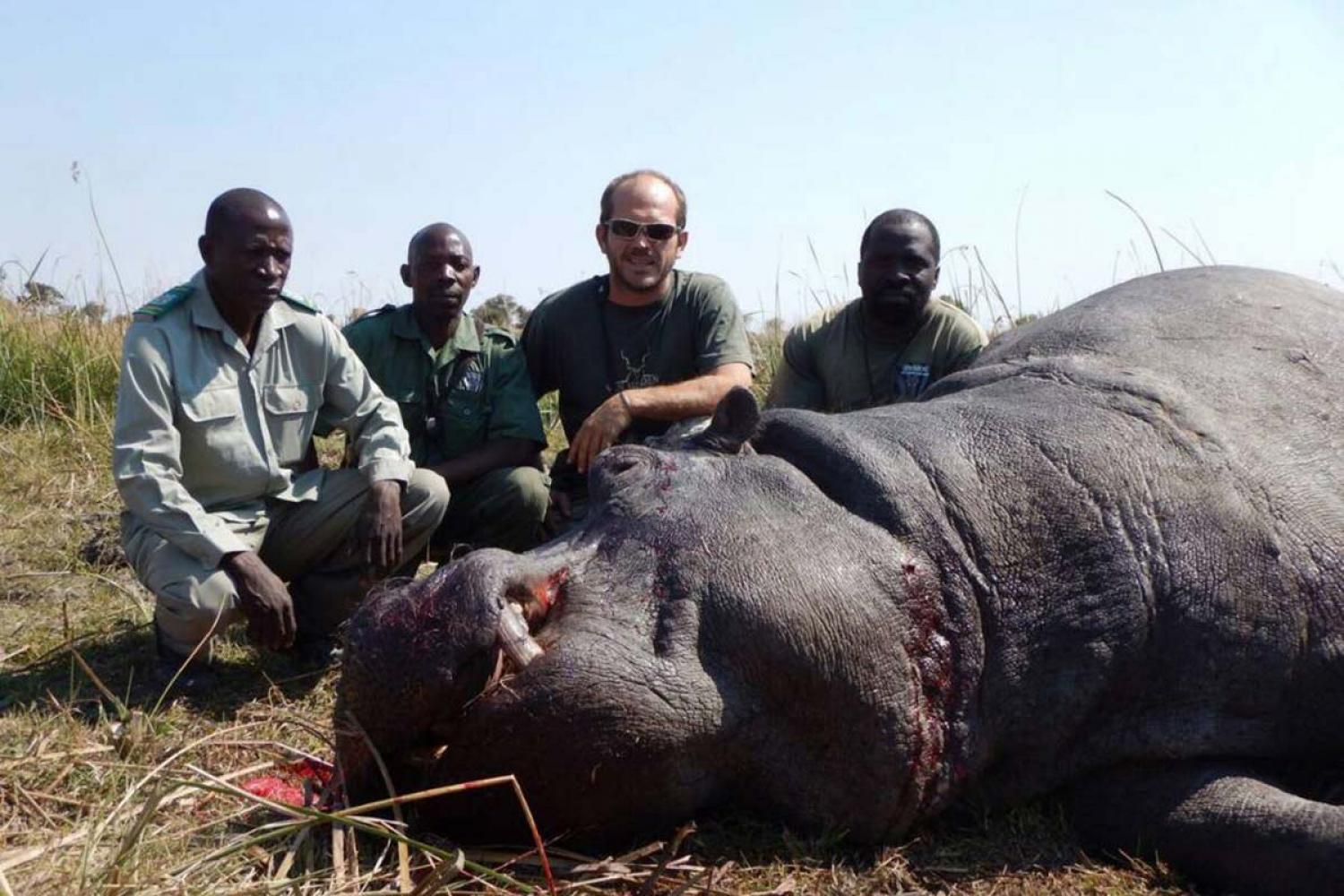 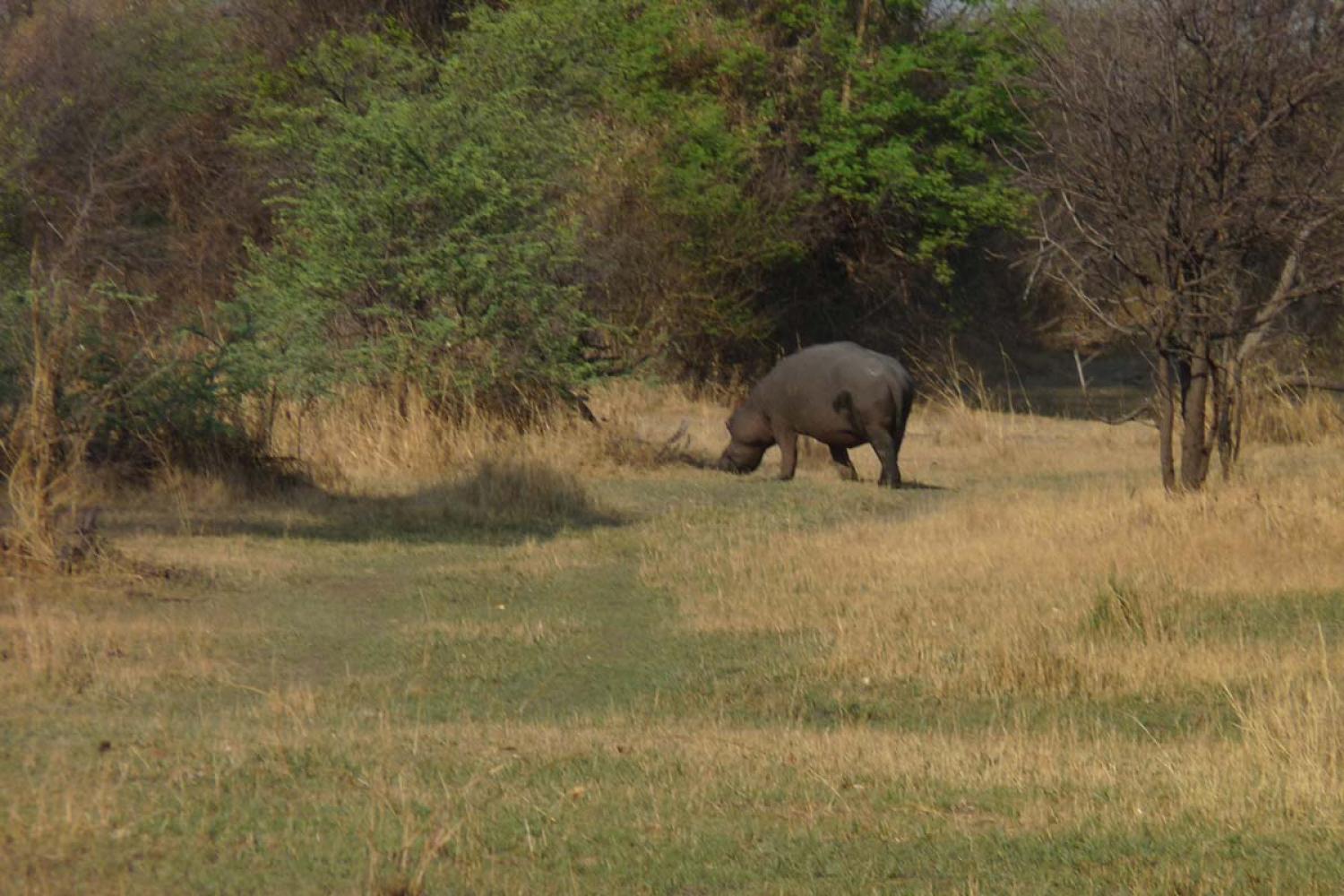 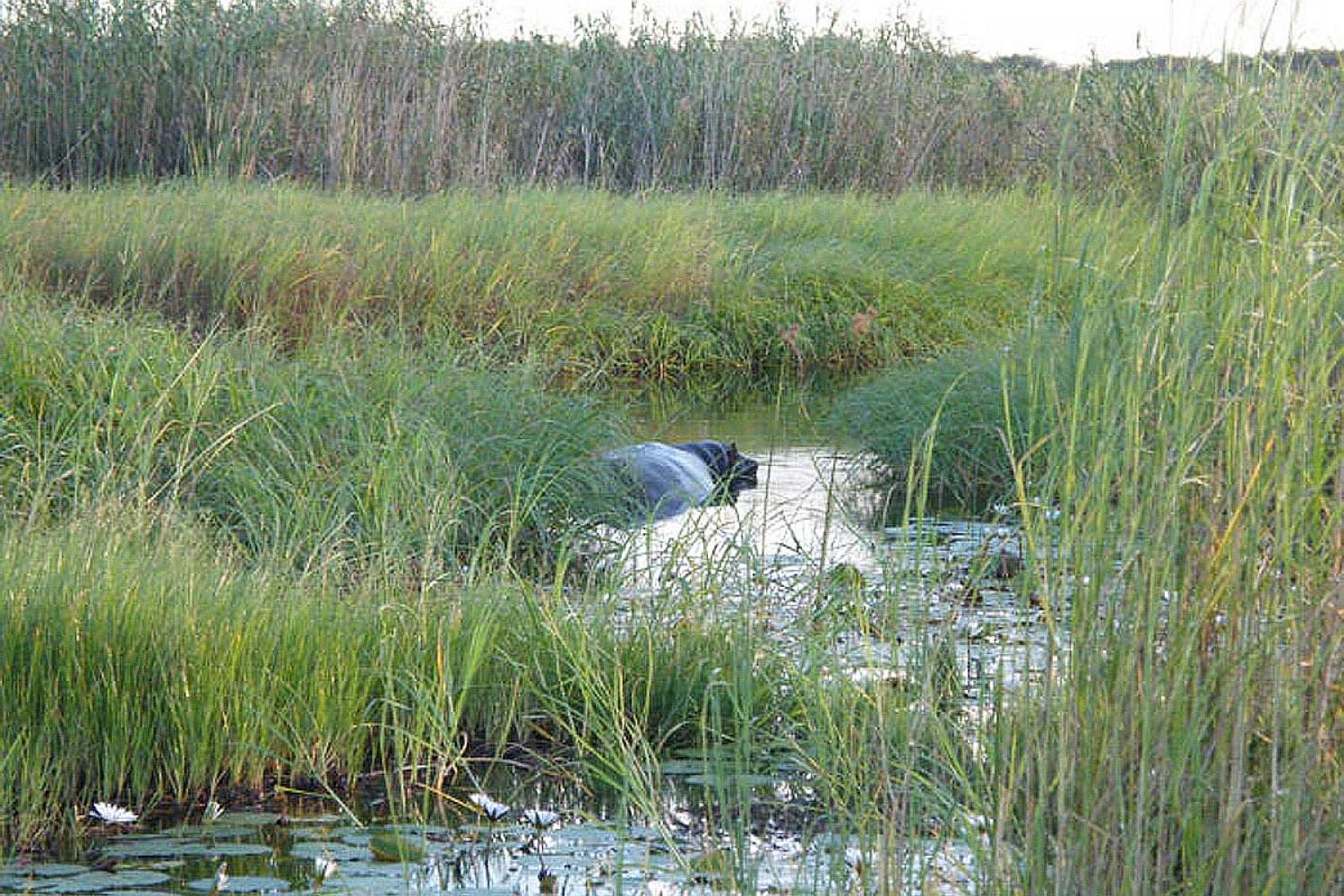 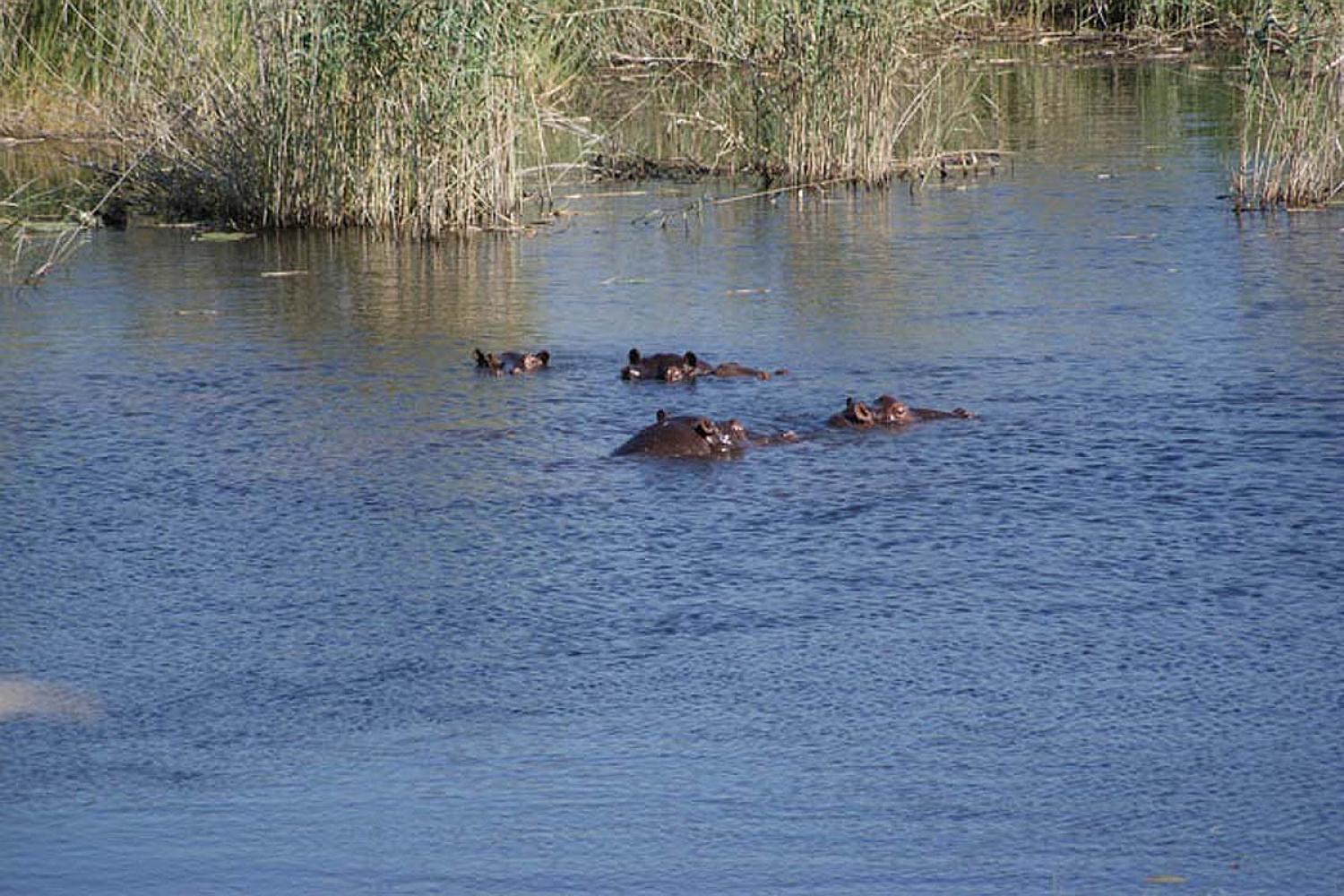 How to hunt Hippo

Shooting hippos is not particularly difficult, but the real challenge lies in finding an old cranky Hippo out of the water, and then getting in around 30 m of him to deliver the “coupe de grace”. Stories abound of ferocious hippo that charge out of the water for no reason, trying to kill all passers by. While some old bulls do get defensive and a bit aggressive, 20% of hippo are shot while they are in the water from about 50 yards away.

Hippos graze from late in the afternoon to early morning. They will leave the safety of water behind and wonder for many kilometres out onto dry land to find good grazing. During the day they laze around in the water and occasionally come out to lie on sandbanks or on little islands in the sun.

On overcast days Hippos are regularly found in Dzoti Conservancy grazing along the sides of water channels or on little islands. During crop season the local residents in Dzoti Conservancy are to glad to see hunters who intend to hunt Hippo. Hippo’s, together with Elephant and Buffalo cause great crop losses for the locals on their fields.

Most Lion hunters will shoot hippo, as it makes excellent lion bait and with problem animals the decision is usually a matter of necessity, rather than choice.

The heart lung shot on Hippo is extremely effective but its thick, blubbery skin makes the vital triangle reference points extremely difficult to see. The most common shot for obvious reasons is the brain shot. The Hippo’s brain is surprisingly small for such a large animal, roughly the size of a man’s fist. Directly between the eyes and the ear are the best areas to aim for.

The .375 H&H is the minimum legal requirement for shooting hippo in Africa. Whereas in Namibia the caliber and bullet combination of choice should produce at least 5400 Joules of muzzle energy.

Where to hunt Hippo in Namibia 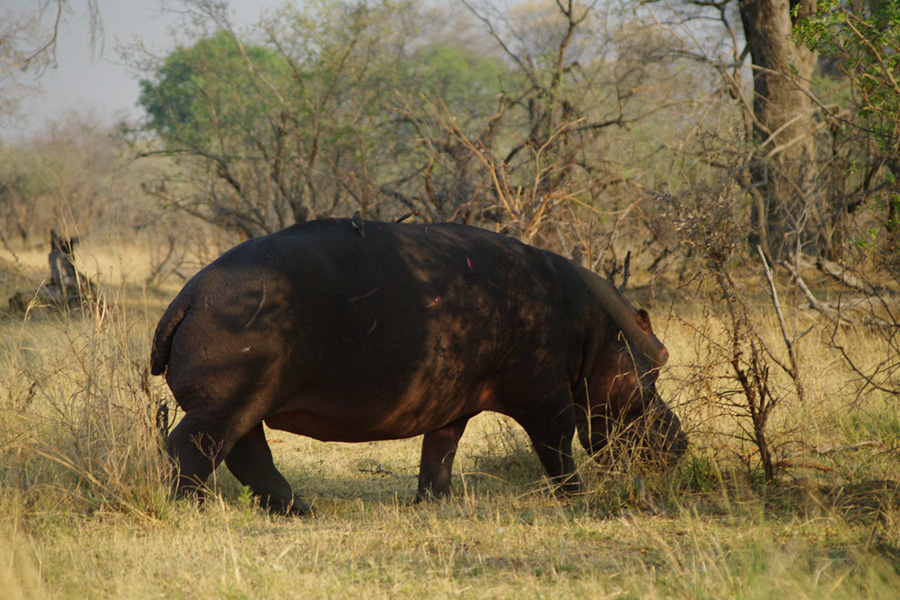 We offer Hippo Hunting in the Dzoti Conservancy in the Zambezi Region in north-eastern Namibia. 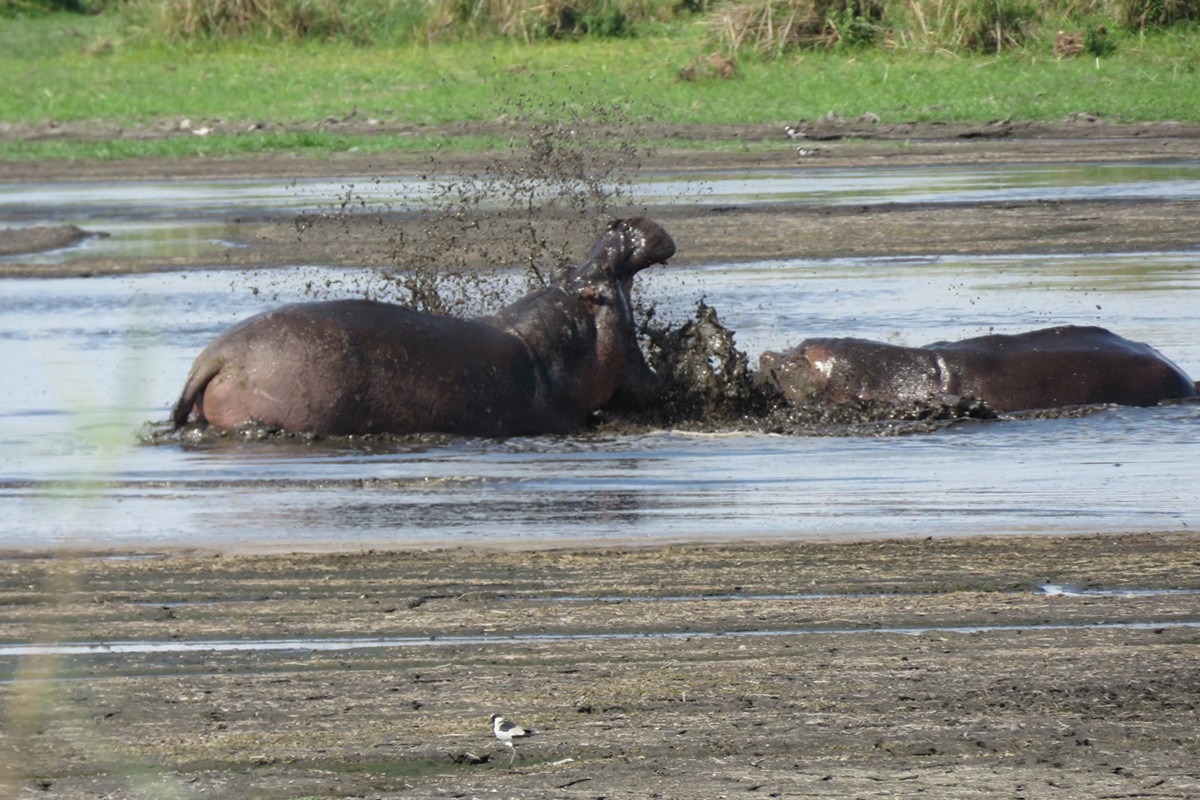 Good rains for 2020/2021 season
After long dry spells with very little or sometimes no rain, open water become scarce and might disappear. This is a major influencing factor for wild...
Read More

Publish the Menu module to "offcanvas" position. Here you can publish other modules as well.
Learn More.